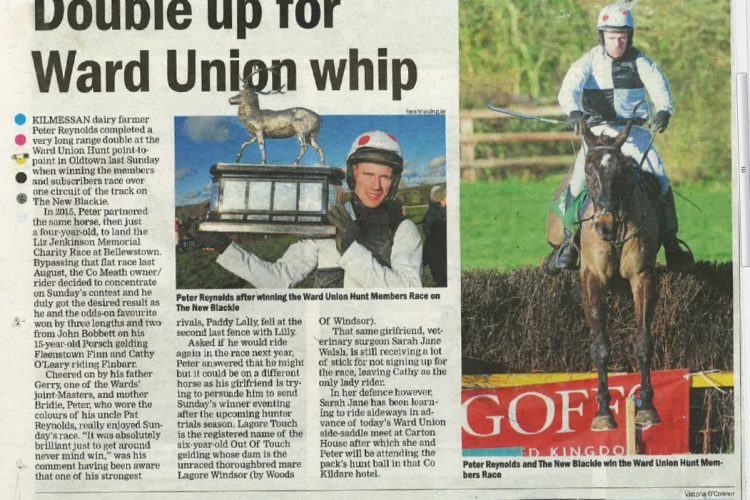 Double up for Ward Union Whip

Kilmessan dairy farmer Peter Reynolds completed a very long range double at the Ward Union Hunt Point-to-Point in Oldtown last Sunday when winning the members and subscribers race over one circuit of the track on the New Blackie.

In 2015 Peter partnered the same horse, then just a four-year-old, to land the Liz Jenkinson Memorial Charity Race at Bellewstown.  Bypassing that flat race last August, the Co. Meath owner/rider decided to concentrate on Sunday’s contest and he duly got the desired result as he and the odds-on favourite won by three lengths and two from John Bobbett on his 15 year old Porsch gelding Fleenstown Finn and Cathy O’Leary riding Finbarr.

Cheered on by his father Gerry, one of the Wards’ joint-Masters, and mother Bridie, Peter, who wore the colours of his uncle Pat Reynolds, really enjoyed Sunday’s race, “It was absolutely brilliant just to get around never mind win,” was his comment having been aware that one of his strongest rivals, Paddy Lally, fell at the second last fence with Lilly.

Asked if he would ride again next year, Peter answered that he might but it could be on a different horse as his girlfriend is trying to persuade him to send Sunday’s winner eventing after the upcoming hunter trials season.  Lagore Touch is the registered name of the six year-old Out Of Touch gelding whose dam is the unraced thoroughbred mare Lagore Windsor (by Woods Of Windsor).

That same girlfriend, veterinary surgeon Sarah Jane Walsh, is still receiving a lot of stick for not signing up for the race, leaving Cathy as the only lady rider.

In her defence however, Sarah Jane has been learning to ride sideways in advance of today’s Ward Union side-saddle meet at Carton House after which she and Peter will be attending the pack’s hunt ball in that Co. Kildare hotel.

Article from the Irish Field, February 2017.