Today’s pack is based in Dunshaughlin, Co. Meath and is a member of the Hunting Association of Ireland in conjunction with the Irish Master of Foxhounds Association, the Irish Foot Harriers Association. There is sometimes a misconception with regard to the Ward Union Hunt that the hunt kills the stag. This is not the case and had never been so.

During the hunting season which runs from October to March the hunt meets twice a week, mainly Tuesdays and Fridays, approximately 45 – 50 times a season. In addition the hunt hosts 2-3 children meets. The club has approximately 200 – 250 members and subscribers, of which 100 are riding members. The club also has a very large supporters club.

Over the years a huge number of people who have visited us, and indeed visitors who have hunted with the Club, have remarked on how well run the facilities at Greenpark and the Hunt are organised. The Club has encouraged visitors for many years to show what it does in an open and transparent manner. The general comment from visitors is that the Ward Union Hunt is as professionally run as any Hunt Club in the Country. This is a testimony to the hard work of our experienced huntsman and staff. 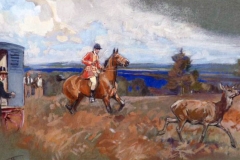 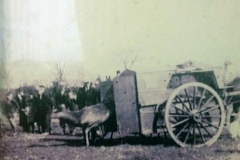 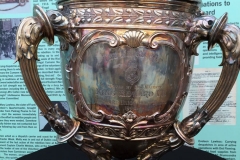 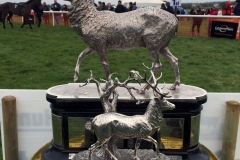 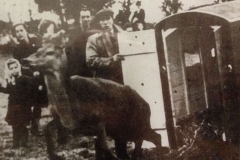 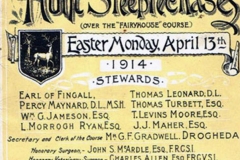 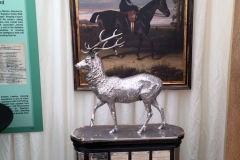 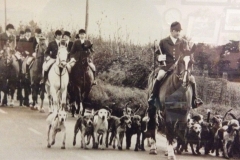 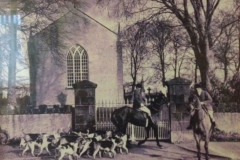 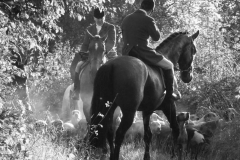 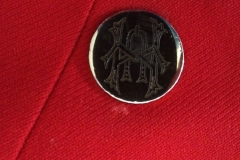 After decades in the doghouse, a long lost portrait of Empress Elisabeth of Austria in Ireland is to find a new home at the RDS.

Long feared lost an important painting of Empress Elisabeth of Austria – on horseback in Ireland – has been found behind a wardrobe in kennels in Co. Meath.

The oil painting is a frame decorated with scrolling shamrock, depicts Elisabeth of Austria, wife of the Habsburg Emperor Franz Joseph I, seated on a bay mare called Domino while hunting in Co. Meath.

It was commissioned by the empress and sent as a thank you gift in the Ward Union Hunt following her visits in Ireland in 1879 and 1880.

But the painting was lost decades ago and only rediscovered last year stored behind a wardrobe at the hunt’s kennels headquarters in Co. Meath.

It had apparently been stashed away for safe keeping and then forgotten.

Now the oil painting, by Wilhelm Richmer – a well known 19th century Austrian portrait painter – is being donated by the Ward Union Hunt to the Royal Dublin Society on “indefinite loan”.

RDS spokesman Gerard Whelan said the painting had apparently been stashed away for safe keeping behind a wardrobe at the kennels and then forgotten. It was found by chance last year.

Austria’s ambassador to Ireland Dr. Walter Hagg, will attend a private ceremony next week when the painting will be presented to Fonsie Mealy, president of the RDS by Christopher Reynolds, chairman of the Ward Union Hunt.

The portrait, titled Domino, will hang in the private members area of the RDS in Ballsbridge but may be on public display during the Dublin Horse show later this year.

Knowing as an artist by her family and friends the empress – who was also queen of Hungary, Bohemian and Croatia – was an accomplished horsewoman who loved to escape the confines of the court in Vienna.

During her extended visits to Ireland she stayed at Lord Langford’s Summerhill House in Co. Meath and participated in various hunts. The empress apparently found Ireland refreshingly free of protocol and in one letter home wrote: “The great charm of Ireland is that there are no Royal Highnesses.

She was presented with the horse, Domino, by the Ward Union Hunt and famously rode into the seminary at Maynooth while chasing a stag.

Sisi brought Domino back to Vienna and when the horse died, asked a taxidermint to remove and mount the hooves in silver. The whereabouts of this ghoulish trophy is unknown.

One of 19th century Europe’s most glamorous royals. Sisi was renowned for her looks and style. She weighed, on average 7 stone 8 lbs (5)kg) and maintained a waist measurement of just 19 inches.

She wore star shaped diamond and pearl encrusted Jewels in her long, chestnut coloured hair which was reputedly washed with a shampoo made of mixing cognac and egg yolk. But she wasn’t all perfect and used a fan (seen in the painting) to hide her bad teeth.

She died in 1898 aged 60 – assassinated by a deranged anarchist in Geneva who fatally stabbed her outside the Hotel Beau Rivage as she waited to board a steamship to Montreux. The Austro – Hungarian Habsburg Empire was later dissolved in the aftermath of the first World War.

The painting is not the first piece of Sisi memorabilia to surface in Ireland. In 2010 a riding ship decorated with a silver band bearing the imperial Habsburg crest which she had presented to Capt. Robert Fowler, master of the Meath Hunt in 1879, was found in the attic of Rahinstown house, Co. Meath by his great, great, grand-nephew Charles Fowler. It was sent for sale to Adam’s and sold for €37,000 to a collector in the Channel Islands who outbid a museum devoted to the emperor in Austria.