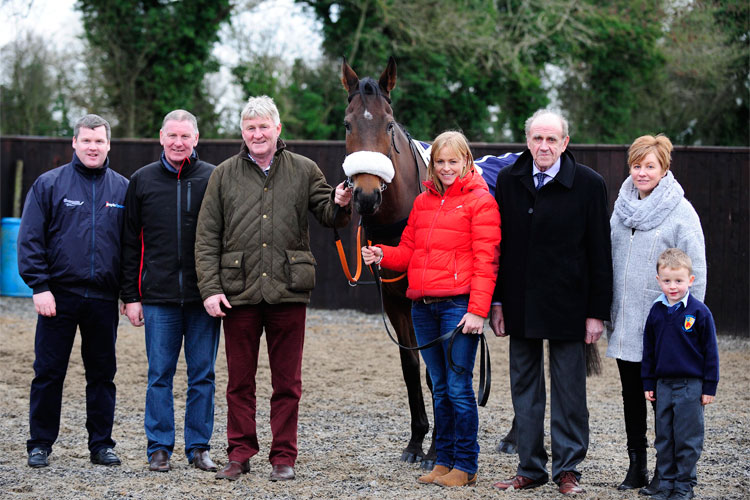 From January first to the last day of August, Dan English became proud owner of the conveniently named race horse ‘You’re the One I Want’, courtesy of the Ward Union Hunt Club Fundraiser Raffle. The Ward Union Hunt, as many will know is based in Dunshaughlin, Co. Meath, and the ticket in question was bought for fifty euro from Mr. English’s daughter, Virginia Considine, a subscribed member of the club and living in Meath herself. The prize; the winner has the honour of owning of a race horse for the coming racing season, totalling approximately eight months of ownership.

The raffle itself proved to be a huge success for the Ward Union Hunt Club, receiving an impressive response from all members. With such a prize on offer, the tickets were quickly sought after and a huge level of support was shown for the fundraiser. While daughter Virginia reported that little thought was given to the matter after the purchase of the ticket, she states that upon receiving the confirmation call shortly after Christmas, her father gave the matter little to no consideration, confirming his decision immedietely. The reward, as mentioned above was a rare opportunity to become named owner of said race horse, who was to be worked and exercised by renowned trainer, Gordon Elliot. A more than generous alternative prize was also on offer if the above was not to the prize-winners satisfaction; seven thousand euros in cash. However, a choice that would no doubt tease and torment many was given no thought by Dan, well aware that he would be unlikely to come across such a chance in the future. Without hesitation, he gratefully accepted ownership of the horse.

Dan himself has a keen interest in watching horse racing, while daughter Virginia is involved in the training of point-to-pointers. These factors, Virginia emphasizes, made the decesion all the more easy to make, being well aware that it was not an everyday opportunity. The decision was also simplfied further by the fact that trainer Elliot is a friend of the family, and so Virginia and company held great confidence in his ability when working with horses. Praise was given to Eliot for being extremely accomodating in realation to the race locations, and it was emphasised that he did his best to attempt to organise races close to Cork, Dan’s current place of residence. It was made clear that the horse could not have been in better hands.

The ownership of the horse began with an official group presentation and photo shoot with the horse and afterwards, the group were given a tour of the yard in which the horse was to be trained in. As the season progressed, the family were notified by Elliot’s secretary well in advance of the races schedueled time and date, in order to provide them with sufficient time to foreplan the coming race day. They were also able to visit the yard to observe the horses progress if they so desired.

After the passing of Dan’s wife in July of the previous year, the opportunity could not have arose at a better suited time for himself and his family. Virginia decribes how the frantic nature of horse ownership and training left little room for idleness, and served as the ideal distraction for the family after their loss. As well as this, it also provided ideal opportunities for family reunions and gatherings, something that was greatly appreciated and cherished by the family.

Dan and company were even more overwhelmed when it came to the horses performance, who was successful on a number of occasions, including three seconds in the dozen or so outings with over €11,000 in prize money to be enjoyed. For a family familiar with the unpredictibilty of horse racing, the excitement of their successes was more than enough to satisfy Dan and family, all of who were well aware of the slim marigns of success involved in the sport and were no doubt overjoyed with their luck. Besides the prize money, which was an obvious bonus, these occasions were described as being invaluable to the family, providing them with a number of fun-filled outings and unforgettable memories, courtesy of the Ward Union Hunt Club.